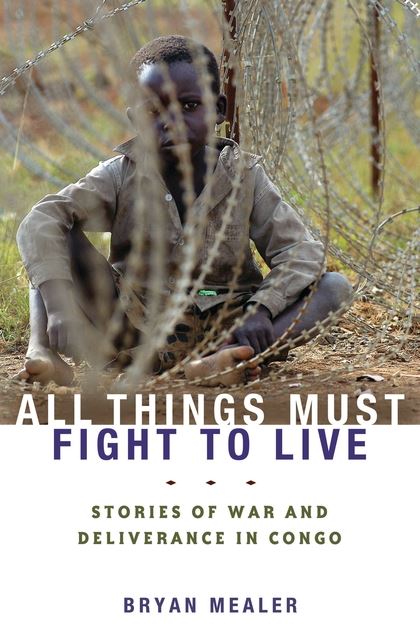 ALL THINGS MUST FIGHT TO LIVE: STORIES OF WAR AND DELIVERANCE IN CONGO

In All Things Must Fight to Live, Bryan Mealer takes readers on a harrowing two-thousand mile journey through Congo, where gun-toting militia still rape and kill with impunity. Amidst burnt-out battlefields where armies still wrestle for control, into the dark corners of the forests, and along the high savanna, where thousands have been slaughtered and quickly forgotten, Mealer searches for signs that Africa's most troubled state will soon rise from ruin.
At once illuminating and startling, All Things Must Fight to Live is a searing portrait of an emerging country facing unimaginable upheaval and almost impossible odds, as well as an unflinching look at the darkness that continues to exist in the hearts of men. It is non-fiction at its finest-powerful, moving, necessary.
PRESS

“[A] troubling expose of the brutalities suffered by those in war-racked Congo.” ―Chicago Tribune

“With vivid prose and compelling emotion…[Mealer] reports his own “creeping emotional atrophy” as he is repulsed and then spellbound by the violence and by the courageous people who struggled to make sense of the fighting.” ―Booklist

“A perceptive, empathetic, stomach-twisting presentation of the human condition during chaos…A quiet paean to the courage he has witnessed, and its final salute to ‘the many proud people of Congo’ is as much eulogy as affirmation.” ―Publishers Weekly

“Bryan Mealer has put his life on the line to bring us a story of terror and courage from the heart of Congo…Both as a journalist and as a reader, my hat’s off to Mealer.” ―Sebastian Junger, author of The Perfect Storm